At 5pm yesterday, Kristin got offered two tickets to see KISS. Neither of us is a fan, but c’mon, isn’t KISS one of those bands everyone should see at some point? We decided to go and that was absolutely the correct decision. Just like the time I saw Marilyn Manson outdoors, in a thunderstorm, while standing on a giant metal floor, I won’t ever forget it.

Target, you have angered me

Let me lay the foundation, then I’ll build this house of cards….

My wife and I got married in May 2009. Like most couples these days, we registered at various shops for gifts we might like. We received gifts before and after the wedding, and we thank all of you who sent them. Recently, we bought a house and our address has changed. In an effort to make sure we don’t miss any gifts, we went online and changed our address with all the previously mentioned “shops.” Except one. Target. It would seem that target’s (from here on target will not be capitalized because I feel they do not deserve it) website would not accept any changes to the registry because the event date has passed. All the other “shops” had no problem changing our address. I’m thinking it’s because they want our business. target apparently does not.

Thinking I was smarter than the system, I figured I would call target and speak to a person capable of understanding the issue. How naive I must be to think this were possible. Three “representatives” later and the problem was solved… at least that’s how target saw it. They deleted my registry. Now nobody could purchase anything from it, let alone have it shipped to the wrong address. I was upset.

About an hour later, my wife receives an email from target containing two links. “Click here” if we solved your problem and “go F’ youself if we didn’t.” I might be remembering that second link incorrectly, it happens. She sent me the links to response since it was I who spoke to the “representatives” of target. Clicking the second link, target asked “what could we have done better”. Below is my response…..

“What could we have done better?”

Long answer, read on….
I called to change the address of my wedding registry. My wedding was this past May and my husband and I recently bought a new home. With the holiday season approaching we anticipated family and friends using our registry for gift ideas. We were concerned gifts would be sent to our old apartment so we went online to change the address. The online system would not allow this because the event date was in the past. No problem, I’ll just call in and have their support team change it for us. The first person I spoke with told me to use the online system. When I explained I did that already, she transferred me to someone else. The second rep. reset my password and said it should work now. No dice, same problem. I was then transferred to a third rep who simply said it can’t be done because the event is more than 90 days old. When I brought up the problem of gifts being sent to our old address her response was “That happens”. Unacceptable. Her only other solution was for her to send the Tech team a request to delete our registry. Again, unacceptable. I suggested she send a request to the Tech team to change the address. She seemed unwilling to do so, but said she would. After hanging up, I had serious doubts about the tech team changing the address, so I decided try once more online and just make the wedding happen in the future. However, mere seconds after hanging up, my account had been deleted. It would seem the third rep came up with her own solution and deleted the registry. Thanks for nothing.

PS. Every other store we registered with had no issue changing our address.

Swine flu at my office! (sortof)

It’s pretty natural that in the course of a week, someone will stop by my desk at work and ask me to sign a card. Birthday’s, weddings, new home purchases, there’s always some reason. Today was no different, or so I thought. When a card was brought by and my signature requested, I thought nothing of it. Until I asked what this one was for. John (fake name to protect the innocent), has swine flu. Or was at least going to have it because his kid(s) have it. Sucks to be John. Let’s hope he get’s well, then takes two more days off (just to be sure) before returning to the office.

The new homeowners would be me and Kristin. Here’s a picture of the place. 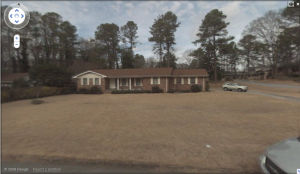